Sir Andrew Fielding Huxley OM PRS (22 November 1917 – 30 May 2012) was a Nobel Prize-winning English physiologist and biophysicist. He was born into the prominent Huxley family. After graduating from Westminster School in Central London, from where he won a scholarship to Trinity College, Cambridge, he joined Alan Lloyd Hodgkin to study nerve impulses. Their eventual discovery of the basis for propagation of nerve impulses (called an action potential) earned them the Nobel Prize in Physiology or Medicine in 1963. They made their discovery from the giant axon of the Atlantic squid. Soon after the outbreak of the Second World War, Huxley was recruited by the British Anti-Aircraft Command and later transferred to the Admiralty. After the war he resumed research at The University of Cambridge, where he developed interference microscopy that would be suitable for studying muscle fibres. In 1952 he was joined by a German physiologist Rolf Niedergerke. Together they discovered in 1954 the mechanism of muscle contraction, popularly called the "sliding filament theory", which is the foundation of our modern understanding of muscle mechanics. In 1960 he became head of the Department of Physiology at University College London. He was elected a Fellow of the Royal Society in 1955, and President in 1980. The Royal Society awarded him the Copley Medal in 1973 for his collective contributions to the understanding of nerve impulses and muscle contraction. He was conferred a Knight Bachelor by Queen Elizabeth II in 1974, and was appointed to the Order of Merit in 1983. He was a fellow of Trinity College, Cambridge, until his death. 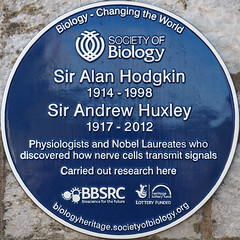 In this building E. D. Adrian first recorded impulses from single nerve fibres, and A. L. Hodgkin & A. H. Huxley determined their mechanism and principles of conduction, transforming our understanding of how the nervous system processes information.

University of Cambridge, Downing Street, CB2 3DY, Cambridge, United Kingdom where they was