Albert (Bert) Henry Baskerville (born as "Baskiville") (15 January 1883 – 20 May 1908) was a Wellington postal clerk, a rugby union forward, author of the book "Modern Rugby Football: New Zealand Methods; Points for the Beginner, the Player, the Spectator" and a pioneer of rugby league. 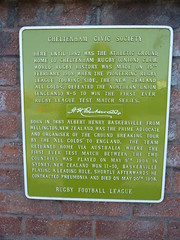