The Feathers Hotel, The Bullring, Ludlow, Shropshire is an historic inn. Its imposing half-timbered frontage was constructed in 1619, over an earlier core, for a local lawyer, Rees Jones. John Newman describes the hotel as a "prodigy" of Tudor architecture and it is noted for its Jacobean furnishings. It is a Grade I listed building, listed on 15 April 1954, and is one of approximately 500 listed buildings in Ludlow, but one of its best known. 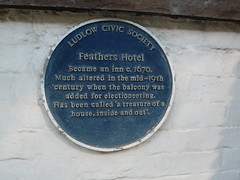 Feathers Hotel Became an inn c. 1670. Much altered in the mid-19th century when the balcony was added for electioneering. Has been called 'a treasure of a house, inside and out'.