Leeds /liːdz/ is a city in West Yorkshire, England. Historically in Yorkshire's West Riding, the history of Leeds can be traced to the 5th century when the name referred to a wooded area of the Kingdom of Elmet. The name has been applied to many administrative entities over the centuries. It changed from being the appellation of a small manorial borough in the 13th century, through several incarnations, to being the name attached to the present metropolitan borough. In the 17th and 18th centuries Leeds became a major centre for the production and trading of wool. Then, during the Industrial Revolution, Leeds developed into a major mill town; wool was the dominant industry but flax, engineering, iron foundries, printing, and other industries were important. From being a compact market town in the valley of the River Aire in the 16th century Leeds expanded and absorbed the surrounding villages to become a populous urban centre by the mid-20th century. The main built-up area sub-division has a population of 474,632 (2011), and the City of Leeds metropolitan borough of which it is a part which has a population of around 757,700 (2011). Today, Leeds is ranked as a gamma world city by the Globalization and World Cities Research Network; and is considered the cultural, financial and commercial heart of the West Yorkshire Urban Area. Leeds is served by four universities, and has the fourth largest student population in the country and has the country's fourth largest urban economy. After London, Leeds is the largest legal centre in the UK, and in 2011 its financial and insurance services industry was worth £2.1 billion, the 4th largest in the UK, with over 30 national and international banks located in the city. It is the leading UK city for telephone delivered banking and related financial services, with over 30 call centres employing around 20,000 people. Outside of London, Leeds has the third busiest railway station and sixteenth busiest airport in terms of passenger numbers in England. Public transport, rail and road communications networks in the region are focused on Leeds and there are a number of twinning arrangements with towns and cities in other countries. Its assigned role in the Leeds City Region partnership recognises the city's importance to regional economic development, and the second phase of High Speed 2 plans to connect Leeds to London via East Midlands Hub and Sheffield Meadowhall. 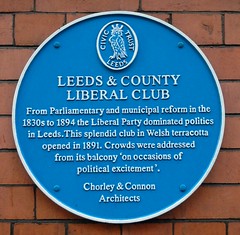 Leeds & County Liberal Club From Parliamentary and municipal reform in the 1830s to 1894 the Liberal Party dominated politics in Leeds. This splendid club in Welsh terracotta opened in 1891. Crowds were addresses from its balcony 'on occasions of political excitement'. Chorley & Connon Architects