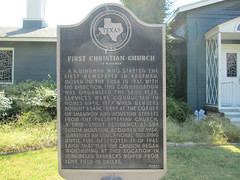 First Christian Church of Kaufman. R. A. Hindman, who started the first newspaper in Kaufman, moved to the area in 1861. With his direction, this congregation was organized the same year. Services were conducted in homes until 1877 when members bought a sanctuary at the corner of Shannon and Houston streets from the Presbyterian church. A two-story residence at 504 S. Houston, acquired in 1956, served as an educational building until fire destroyed it in 1961. Later that year the church began worshiping at this location in remodeled barracks moved from Love Field in Dallas. #9427