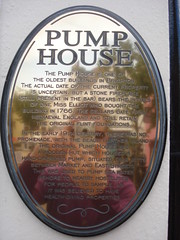 Pump House. The Pump House is one of the oldest buildings in Brighton. The actual date of the current property is uncertain, but a stone fireplace (still present in the bar) bears the initials of one Miss Elliot who bought the building in 1766. The cellars date from mediaeval England and still retain the original flint foundations. In the early 19th century, there was no promenade, with the beach further inland. The original Pump House was a wooden hut which housed a hand-operated pump, situated on a jetty between Market and East Streets. This was used to pump sea water ashore to nearby hostelries for people to sample as it was believed to have health-giving properties.