A World Heritage Site is a landmark which has been officially recognized by the United Nations, specifically by UNESCO. Sites are selected on the basis of having cultural, historical, scientific or some other form of significance, and they are legally protected by international treaties. UNESCO regards these sites as being important to the collective interests of humanity. More specifically, a World Heritage Site is an already classified landmark on the earth, which by way of being unique in some respect as a geographically and historically identifiable piece is of special cultural or physical significance (such as either due to hosting an ancient ruins or some historical structure, building, city, complex, desert, forest, island, lake, monument, or mountain) and symbolizes a remarkable footprint of extreme human endeavour often coupled with some act of indisputable accomplishment of humanity which then serves as a surviving evidence of its intellectual existence on the planet. And with an ignoble intent of its practical conservation for posterity, but which otherwise could be subject to inherent risk of endangerment from human or animal trespassing, owing to unmonitored/uncontrolled/unrestricted nature of access or threat by natural or accelerated extinction owing to local administrative negligence, hence it would have been listed and demarcated by the United Nations Educational, Scientific and Cultural Organization (UNESCO) to have been identified or recognised and officially christened and internationally elevated through multilateral declaration by UNESCO as a universally protected zone. The list is maintained by the international World Heritage Programme administered by the UNESCO World Heritage Committee, composed of 21 UNESCO member states which are elected by the General Assembly. The programme catalogues, names, and conserves sites of outstanding cultural or natural importance to the common culture and heritage of humanity. Under certain conditions, listed sites can obtain funds from the World Heritage Fund. The program was founded with the Convention Concerning the Protection of the World's Cultural and Natural Heritage, which was adopted by the General Conference of UNESCO on 16 November 1972. Since then, 192 states parties have ratified the convention, making it one of the most adhered to international instruments. Only Liechtenstein, Nauru, Somalia, Timor-Leste, and Tuvalu are not Parties to the Convention. As of July 2016, 1052 sites are listed: 814 cultural, 203 natural, and 35 mixed properties, in 165 states parties. According to the sites ranked by country, Italy is home to the greatest number of World Heritage Sites with 51 sites, followed by China (50), Spain (45), France (42), Germany (41), India (35) and Mexico (34). UNESCO references each World Heritage Site with an identification number; however, new inscriptions often include previous sites now listed as part of larger descriptions. Consequently, the identification numbers exceed 1,200, even though there are fewer on the list. While each World Heritage Site remains part of the legal territory of the state wherein the site is located, UNESCO considers it in the interest of the international community to preserve each site. 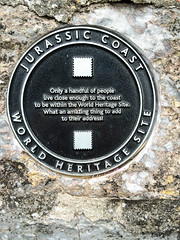 Only a handful of people live close enough to the coast to be within the World Heritage Site. What an amazing thing to add to their address !