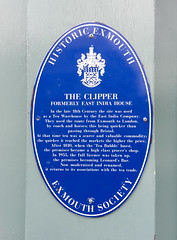 The Clipper. Formerly East India House. In the late 18th Century the site was used as a Tea Warehouse by the East India Company. They used the route from Exmouth to London by coach and horses: this being quicker than passing through Bristol. At that time tea was a scarce and valuable commodity: the quicker it reached the markets the higher the price. After 1810, when the 'Tea Bubble' burst, the premises became a high class grocer's shop. In 1955, the full licence was taken up, the premises becoming Leonard's Bar. Now modernised and renamed it returns to its associations with the tea trade.

The Clipper, The Strand, Exmouth, United Kingdom where it sited