Isabella Ormston Ford (23 May 1855 – 14 July 1924) was an English social reformer, suffragist and writer. She became a public speaker and wrote pamphlets on issues related to socialism, feminism and worker's rights. After becoming concerned with the rights of female mill workers at an early age, Ford became involved with trade union organisation in the 1880s. A member of the National Administrative Council of the Independent Labour Party, she was the first woman to speak at a Labour Representation Committee (which became the British Labour Party) conference. 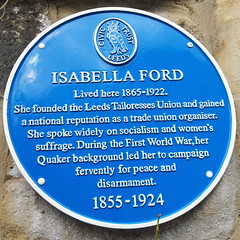 Isabella Ford. Lived here1865-1922. She founded the Leeds Tailoresses Union and gained a national reputation as a trade union organiser. She spoke widely on socialism and women's suffrage. During the First World War, her Quaker background led to her campaign fervently for peace and disarmament. 1855-1924.