John Fowler (11 July 1826 – 4 December 1864) was an English agricultural engineer who was a pioneer in the use of steam engines for ploughing and digging drainage channels. His inventions significantly reduced the cost of ploughing farmland, and also enabled the drainage of previously uncultivated land in many parts of the world. 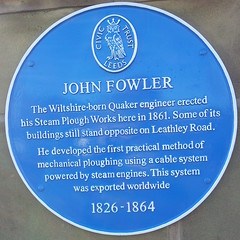 John Fowler. The Wiltshire-born Quaker engineer erected his Steam Plough Works here in 1861. Some of its buildings still stand opposite on Leathley Road. He developed the first practical method of mechanical ploughing using a cable system powered by steam engines. The system was exported worldwide. 1826-1864.