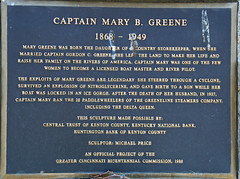 Captain Mary B. Greene. 1868-1949. Mary Green was born the daughter of a country storekeeper. When she married Captain Gordon C. Greene, she left the land to make her life and raise her family on the rivers of America. Captain Mary was one of the few women to become a licensed boat master and river pilot. The exploits of Mary Greene are legendary. She steered through a cyclone, survived an explosion of nitroglycerine, and gave birth to a son while her boat was locked in an ice gorge. After the death of her husband, in 1927, Captain Mary ran the 28 paddlewheelers of the Greeneline Steamers Company, including the Delta Queen. This sculpture made possible by: Central Trust of Kenton County, Kentucky National Bank, Huntington Bank of Kenton County. Sculptor: Michael Price. An official project of the Greater Cincinnati Bicentennial Commission, 1988.

Riverside Drive at George Rogers Clark Park, Covington, KY, United States where they was near