Sir Alexander Chapman Ferguson CBE (born 31 December 1941) is a Scottish former football manager and player, best known for managing Manchester United from 1986 to 2013. He is widely regarded as the greatest football manager of all time, and has won more trophies than any other manager in the history of football. Ferguson played as a forward for several Scottish clubs, including Dunfermline Athletic and Rangers. While playing for Dunfermline, he was the top goalscorer in the Scottish league in the 1965–66 season. Towards the end of his playing career he also worked as a coach, then started his managerial career with East Stirlingshire and St Mirren. Ferguson then enjoyed a highly successful period as manager of Aberdeen, winning three Scottish league championships, four Scottish Cups and the UEFA Cup Winners' Cup in 1983. He briefly managed Scotland following the death of Jock Stein, taking the team to the 1986 World Cup. Ferguson was appointed manager of Manchester United in November 1986. During his 26 years with Manchester United he won 38 trophies, including 13 Premier League titles, five FA Cups, and two UEFA Champions League titles. He was knighted in the 1999 Queen's Birthday Honours list for his services to the game. Ferguson is the longest-serving manager of Manchester United, having overtaken Sir Matt Busby's record on 19 December 2010. He retired from management at the end of the 2012–13 season, having won the Premier League in his final season. 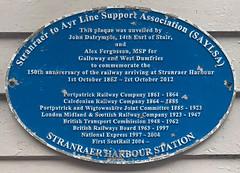 Port Rodie, Stranraer, United Kingdom where they was