Donald Henry Pleasence OBE (/ˈplɛzəns/; 5 October 1919 – 2 February 1995) was an English actor. He began his career on stage in the West End before transitioning into a screen career, where he played numerous supporting and character roles including RAF Flight Lieutenant Colin Blythe in The Great Escape (1963), the villain Ernst Stavro Blofeld in the James Bond film You Only Live Twice (1967), SEN 5241 in THX 1138 (1971), and the deranged Clarence "Doc" Tydon in Wake in Fright (1971). Pleasence starred as psychiatrist Dr Samuel Loomis in Halloween (1978) and four of its sequels, a role for which he was nominated for a Saturn Award for Best Actor. The series' popularity and critical success led to a resurgent career for Pleasence, who appeared in numerous American and European-produced horror and thriller films. He collaborated with Halloween director John Carpenter twice more, as the President of the United States in Escape from New York (1981), and as the Priest in Prince of Darkness (1987). 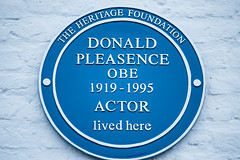 11 Strand on the Green, Chiswick, London, United Kingdom where they lived