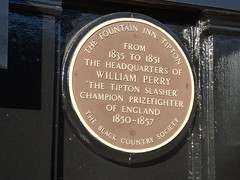 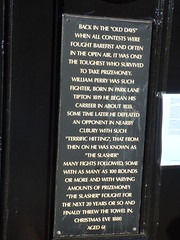 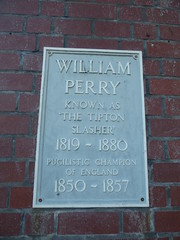 Back in the "old days" when all contests were fought barefist and often in the open air. It was only the toughest who survived to take prizemoney. William Perry was such figher, born in Park Lane Tipton 1819 he began his career in about 1835. Some time later he defeated an opponent in nearby Clbury with such "Terrific hitting", that from then on he was known as "The Slasher". Many fights followed, some with as many as 100 rounds or more and with varying amounts of prizemoney "The Slasher" fought for the next 20 years or so and finally through the towel in, Christmas Eve 1880 aged 61