Paddington is a 2014 British-French family comedy film directed by Paul King, written by King and Hamish McColl, and produced by David Heyman. Based on Paddington Bear by Michael Bond, the film stars Ben Whishaw as the voice of the title character, along with Hugh Bonneville, Sally Hawkins, Julie Walters, Jim Broadbent, Peter Capaldi and Nicole Kidman in live-action roles. The film was co-produced by the French company StudioCanal and the British company Heyday Films. It was released in the United Kingdom on 28 November 2014 and grossed $265.3 million worldwide on a €38.5 million budget. It received an Empire Award nomination for Best British Film. A sequel, Paddington 2, is scheduled to be released in 2017. 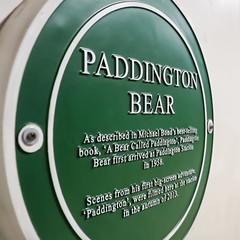 Paddington Bear As described in Michael Bond's best-selling book, 'A Bear Called Paddington', Paddington Bear first arrived at Paddington Station in 1958. Scenes from his first big-screen adventure 'Paddington. were filmed here at the station in the autumn of 2013.