Pocahontas (US: /ˌpoʊkəˈhɒntəs/, UK: /ˌpɒk-/; born Amonute, known as Matoaka, c. 1596 – March 1617) was a Native American woman, belonging to the Powhatan people, notable for her association with the colonial settlement at Jamestown, Virginia. She was the daughter of Powhatan, the paramount chief of a network of tributary tribes in the Tsenacommacah, encompassing the Tidewater region of Virginia. Pocahontas was captured and held for ransom by the Colonists during hostilities in 1613. During her captivity, she was encouraged to convert to Christianity and was baptized under the name Rebecca. She married tobacco planter John Rolfe in April 1614 aged about 17 or 18, and she bore their son Thomas Rolfe in January 1615. In 1616, the Rolfes travelled to London where Pocahontas was presented to English society as an example of the "civilized savage" in hopes of stimulating investment in the Jamestown settlement. On this trip she may have met Squanto, a Patuxet Indian from New England. She became something of a celebrity, was elegantly fêted, and attended a masque at Whitehall Palace. In 1617, the Rolfes set sail for Virginia; Pocahontas died at Gravesend of unknown causes, aged 20 or 21. She was buried in St George's Church, Gravesend, in England; her grave's exact location is unknown because the church was rebuilt after a fire destroyed it. Numerous places, landmarks, and products in the United States have been named after Pocahontas. Her story has been romanticized over the years, with some aspects which are probably fictional. Many of the stories told about her by John Smith have been contested by her documented descendants. She is a subject of art, literature, and film, and many famous people have claimed to be among her descendants through her son, including members of the First Families of Virginia, First Lady Edith Wilson, American Western actor Glenn Strange, and astronomer Percival Lowell. 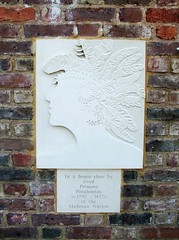 London Road, Brentford, , where they lived near