Alexandra Park is a 60-acre (24 ha) park in the Whalley Range district of Manchester, England. It was designed by Alexander Hennell, opened in 1868 and its initial purpose was to "deter the working men of Manchester from the alehouses during their day off". The lodge and gateways are the work of Alfred Darbyshire. The park was developed by the Manchester Corporation before the area was incorporated into the city, being sited wholly in the then Withington Local Board area. Work begun in late 2012 has led to major changes in the park. The park is a well known site of an annual Caribbean music festival and is located between Princess Road, Claremont Road, Demesne Road and Alexandra Road South, in the M16 postcode district. Part of Manchester's Black History Trail crosses the park. The park gave its name to the nearby Alexandra Park station, until a name-change, on amalgamation in 1923, in order to avoid ticketing confusion. British aircraft manufacturer Avro assembled aircraft at the Alexandra Park Aerodrome, south of Mauldeth Road West, from 1918, but left for Woodford Aerodrome on its closure in 1924. The park gives its name to a nearby council estate, developed in the 1960s. In the 1970s, Children's Christian Crusade gatherings were hosted in the park annually. 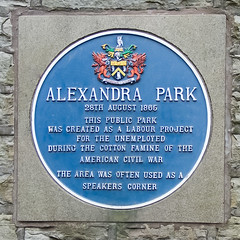 Alexandra Park 28th August 1865. This public park was crested as a labour project for the unemployed during the cotton famine of the American Civil War. The area was often used as a speakers corner