Anne Lister (3 April 1791 – 22 September 1840) was an English landowner and diarist from Halifax, West Yorkshire. Throughout her life, she kept diaries that chronicled the details of her daily life, including her lesbian relationships, her financial concerns, her industrial activities, and her work improving Shibden Hall. Her diaries contain 7,720 pages and more than 5 million words and about a sixth of them – those concerning the intimate details of her romantic and sexual relationships – were written in code. The code, derived from a combination of algebra and Ancient Greek, was deciphered in the 1930s. Lister is often called "the first modern lesbian" for her clear self-knowledge and openly lesbian lifestyle. Called "Fred" by her lover and "Gentleman Jack" by Halifax residents, she suffered harassment for her sexuality, but recognised her similarity to the Ladies of Llangollen, whom she visited. 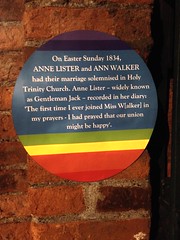 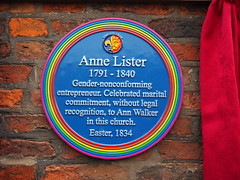 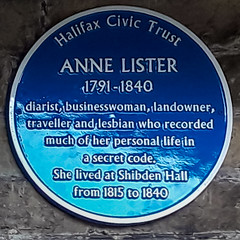 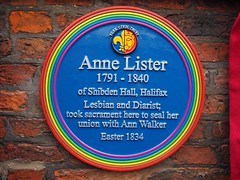 On Easter Sunday 1834, Anne Lister and Ann Walker had their marriage solemnised in Holy Trinity Church. Anne Lister - widely known as Gentleman Jack - recorded in her diary: 'The first time I ever joined Miss W[alker] in my prayers - I had prayed that our union might be happy'.

Holy Trinity Church, 70 Goodramgate, York, United Kingdom where they was married at (1834)

Holy Trinity Church, Goodramgate , York, United Kingdom where they was married at (1834)

Anne Lister 1791-1840 diarist, businesswoman, landowner, traveller and lesbian who recorded much of her personal life in a secret code. She lived at Shibden Hall from 1815 to 1840

Holy Trinity Church, Goodramgate, York, United Kingdom where they was