Salisbury Playhouse is a theatre in the English county of Wiltshire. It was built in 1976 and comprises the 517-seat Main House and the 149-seat Salberg, a rehearsal room and community & education space. Plays in the Main House are often own or co-produced work, of which there are between eight and ten a year. The Playhouse also houses touring productions and a variety of events as part of the Salisbury International Arts Festival. The Studio programme is the focus for the theatre’s work for and with young people: which includes toured-in work, work from the Youth Theatre, Stage '65, and workshop productions. Studio shows produced by the theatre were recently re-introduced. Salisbury Playhouse’s Tesco Community & Education Space and Rehearsal Room opened in July 2007. The Artistic Director is Gareth Machin, who was appointed in October 2011 and the Executive Director is Sebastian Warrack, appointed October 2012. The Board Of Trustees are Tim Crarer (Chairman), Doric Bossom, Sarah Butcher, Andy Bridewell, Tom Clay, Nick Frankfort, Rosemary Macdonald, Niall Murphy, John Perry, Rupert Sebag-Montefiore and Susan Shaw. It is part of Arts Council England's National Portfolio of Organisations (NPO) and also receives regular funding from Wiltshire Council and Salisbury City Council. 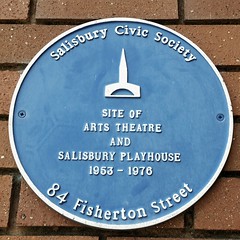