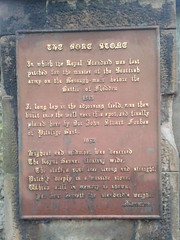 In which the Royal Standard was last pitched for the muster of the Scottish Army on the Borough-Muir before the Battle of Flodden 1513 It long lay in the adjoining field, was then built into this wall near this spot, and finally placed here by Sir John Stuart Forbes of Pitsligo Bart 1852. Highest and midmost was described The Royal Banner floating wide; The Staff, a pine iter strong and straight, Pitch'd deeply in a massive stone, Which still in memory is shown, yet bend beneath the standard's weight.

Morningside Road, Edinburgh, United Kingdom where they was (1852)