Robert Fergusson (5 September 1750 – 16 October 1774) was a Scottish poet. After formal education at the University of St Andrews, Fergusson led a bohemian life in Edinburgh, the city of his birth, then at the height of intellectual and cultural ferment as part of the Scottish enlightenment. Many of his extant poems were printed from 1771 onwards in Walter Ruddiman's Weekly Magazine, and a collected works was first published early in 1773. Despite a short life, his career was highly influential, especially through its impact on Robert Burns. He wrote both Scottish English and the Scots language, and it is his vivid and masterly writing in the latter leid for which he is principally acclaimed. 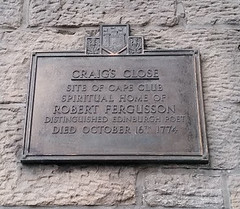 Craig's Close, Edinburgh, United Kingdom where they was