John Leslie Prescott, Baron Prescott (born 31 May 1938) is a British politician who served as Deputy Prime Minister of the United Kingdom from 1997 to 2007 and as First Secretary of State from 2001 to 2007. A member of the Labour Party, he was Member of Parliament (MP) for Kingston upon Hull East from 1970 to 2010. He was seen as the political link to the working class in a Labour Party increasingly led by modernising, middle-class professionals such as Tony Blair and Peter Mandelson and developed a reputation as a key conciliator in the often stormy relationship between Blair and Gordon Brown. Born in Prestatyn, Wales, in his youth Prescott failed the eleven-plus entrance exam for grammar school and worked as a ship's steward and trade union activist. He went on to graduate from Ruskin College and the University of Hull. In the 1994 Labour Party leadership election, he stood for both Leader and Deputy Leader of the Labour Party, winning election to the latter office. He was appointed Deputy Prime Minister after Labour's victory in the 1997 election, with an expanded brief as Secretary of State for the Environment, Transport and the Regions until 2001 then subsequently First Secretary of State until 2007. In June 2007, he resigned as Deputy Prime Minister, coinciding with Tony Blair's resignation as Prime Minister. Following an election within the Labour Party, he was replaced as deputy leader by Harriet Harman. After retiring as a Member of Parliament at the 2010 general election, he entered the House of Lords as a life peer with the title Baron Prescott, of Kingston upon Hull in the County of East Yorkshire. He stood as the Labour candidate in the 2012 election to be the first Police and Crime Commissioner for Humberside Police but lost to Conservative Party candidate Matthew Grove. Prescott resigned from the Privy Council in 2013 to protest against delays to the introduction of press regulation which he supported. In February 2015, he returned to politics as an adviser to Labour leader Ed Miliband. 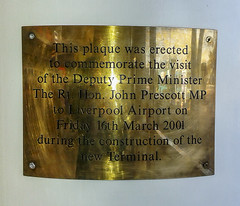 This plaque was erected to commemorate the visit of the Deputy Prime Minister The Rt. Hon. John Prescott MP to Liverpool Airport on Friday 16th March 2001 during the construction of the new terminal.