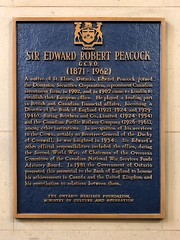 Sir Edward Robert Peacock G.C.V.O. (1871-1962 A native of St. Elmo, Ontario, Edward Peacock joined the Dominion Securities Corporation, a prominent Canadian investment firm, in 1902, and in 1907 came to London to establish their European office. He played a leading part in British and Canadian financial affairs, becoming a Director of the Bank of England (1921-1924 and 1929-1946), Baring Brothers and Co., Limited (1924-1961), among other institutions. In recognition of his services to the Crown, notably as Receiver-General of the Duchy of Cornwall, he was knighted in 1934. Sir Edward's other official responsibilities included the office, during the Second World War, of Chairman of the Overseas Committee of the Canadian National War Services Funds Advisory Board. In 1981 the Government of Ontario presented this Memorial to the Bank of England to honour his achievements in Canada and the United Kingdom and his contribution to relations between them.

Threadneedle Street, London, United Kingdom where they was