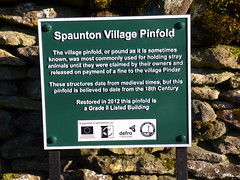 Spaunton Village Pinfold The village pinfold, or pound as it is sometimes known, was most commonly used for holding stray animals until they were claimed by their owners and released on payment of a fine to the village Pindar. These structure date from medieval times, but this pinfold is believed to date from the 18th Century. Restored in 2012 this pinfold is a Grade II Listed Building.