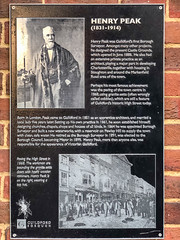 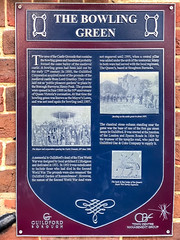 Henry Peak (1831-1914) Henry Peak was Guildford's first Borough Surveyor. Amongst many other projects, he designed the present Castle Grounds, which opened in June 1888. He also had an extensive private practice as an architect, playing a major part in developing Charlotteville, together with housing in Stoughton and around the Marketfield Road area of the town. Perhaps his most famous achievement was the paving of the town centre in 1868, using granite setts (often wrongly called cobbles), which are still a feature of Guildford's historic High Street today. Born in London, Peak came to Guildford in 1851 as an apprentice architect, and married a local lady five years later. Setting up his own practice in 1864 he was appointed Borough Surveyor and built a new waterworks, with on Pewley Hill to supply the town with clean, safe water. He retired as the Borough Surveyor in 1891, was elected to the Borough Council, becoming Mayor in 1899. Henry Peak, more than anyone else, was responsible for the appearance of Victorian Guildford.

The Bowling Green The area of the Castle Grounds that contains the bowling green and bandstand probably formed the outer bailey of the medieval castle. A bowling green had been laid out by the early 17th century. In 1885, the Guildford Corporation acquired most of the grounds of the medieval castle from Lord Grantley. They were laid out as 'public pleasure gardens' to plans by the Borough Surveyor, Henry Peak. The grounds were opened in 1888 on the 50th anniversary of Queen Victoria's coronation. At the time the bowling green was known as the Mayor's Lawn, and was not used again for bowling until 1907. A memorial to Guildford's dead of the First World Was was designed by local architect F.J. Hodgson and dedicated in 192. In 1952 it was rededicated to include those who had died in the Second World War. The grounds were also renamed 'the Guildford Garden of Remembrance'. However, the names of the Second World War dead were not engraved until 1995, when a central pillar was added under the arch of the memorial. Many in both wars had served with the local regiment, The Queen's, based at Stoughton Barracks. The classical stone column standing near the gates was the base of one of the first gas street lamps in Guildford. It was erected at the junction of the London and Epsom Roads in 1824 by the trustees of the turnpike road, who paid the Guidlford Gas & Coke Company to supply it.