Loughton is a London Underground station, some two miles north of the Greater London boundary, in the Epping Forest district of Essex. It is served by the Central line and lies between Buckhurst Hill and Debden. It is the larger of the two Underground stations in the town of Loughton, with Debden station being the smaller. For the purposes of fare charging it is in Zone 6. 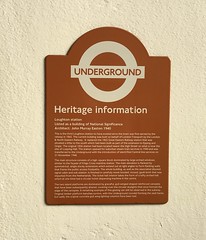 Loughton Station Listed as a building of National Significance Architect: John Murray Easton 1940 This is the third Loughton station to have existed since the town was first served by the railway in 1865. The current building was built on behalf of London Transport by the London & North Eastern Railway. It replaced the 1865 Great Eastern railway station that was situated a little to the south which had been built as part of the extension to Epping and Ongar. The original 1856 station had been located nearer the High Street on what is now the site of Looping Hall. The station opened for suburban steam train services in 1940 and was transferred to the Underground with the introduction of electrified Central line services on 21 November 1948. The main structure consists of a high, square block dominated by large arched windows, similar to the facade of Kings Cross mainline station. The main elevation is flanked by symmetrical, single-storey extensions which extend out at right angles to form flanking walls that frame the public access footpaths. The whole building, as well as the associated disused signal cabin and sub-station, is finished in carefully monk bonded, incised, gault brick that was imported from the Netherlands. The ticket hall interior takes the form of a lofty arched hall which at one time had a circular ticket dispensing machine in the centre. The two island platforms are dominated by graceful, gull-wing shaped reinforced canopies that have been subsequently altered, covering over the circular skylights that once formed the edge of the canopies. A remaining example of this glazing can still be observed in the subway. Original timber platform benches survive, with Underground roundel forming the seat backs, but sadly the original concrete gold wing lighting columns have been lost.

Station Road, London, United Kingdom where it was