Anna Masterton Buchan (1877–1948) was a Scottish novelist who wrote under the pen name O. Douglas. Most of her novels were written and set between the wars and portrayed small town or village life in southern Scotland, reflecting her own life. Anna Buchan was born in Pathhead, Scotland, the daughter of the Reverend John Buchan and Helen Masterton. She was the younger sister of John Buchan, the renowned statesman and author. She attended Hutchesons' Grammar School in Glasgow, but lived most of her later life in Peebles in the Scottish border country, not far from the village of Broughton where her parents first met. Her first novel Olivia in India was published in 1912 by Hodder & Stoughton. Unforgettable, Unforgotten (1945) is a memoir of her brother John and of the Buchan family, while Farewell to Priorsford is her autobiography, published posthumously in 1950. Her work is displayed alongside her brother's at the John Buchan Museum in Peebles. 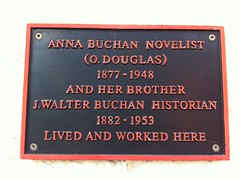