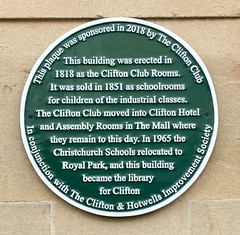 This building was erected in 1818 as the Clifton Club Rooms. It was sold in 1851 as schoolrooms for children of the industrial classes. The Clifton Club moved into Clifton Hotel and Assembly Rooms in The Mall where they remain to this day. In 1965 the Christchurch Schools relocated to Royal Park, and this building became the library for Clifton