Dame Commander of the Most Excellent Order of the British Empire, president of Aberdeen Association for Women's Suffrage, and pioneer of Women's education

Dame Louisa Innes Lumsden DBE(31 December 1840-2 January 1935) born into a wealthy family in Aberdeen, Scotland DBE, was a lecturer in classics at Girton College, Cambridge and the first Headmistress of St Leonards School, Fife. She is credited with introducing lacrosse to the school. Girton College was established by Emily Davies in 1869 in Hitchin a village 27 miles from Cambridge, as the first college for women students, studying for the Tripos examinations. Among the first five students was Louisa Lumsden. She completed the course and went on to become a lecturer at the college. After some years she resigned after conflicts with Emily Davies about neglect of student welfare. Lumsden, in a letter written home from the White Mountains in New Hampshire dated 6 September 1884, recounted her visit to watch the Canghuwaya Indians play lacrosse against the Montreal Club in Montreal. She wrote: It is a wonderful game, beautiful and graceful. (I was so charmed with it that I introduced it at St Leonards.)" Miss Lumsden resigned from St Leonards in 1882 but Rosabelle Sinclair, who established the first women's lacrosse team in the United States attended St Leonards between 1906 and 1910. Rosabelle Sinclair established lacrosse for girls at the Bryn Mawr School in Baltimore, Maryland. Miss Lumsden's autobiography, Yellow Leaves (1933), was eventually presented to the US Lacrosse Museum in Baltimore. 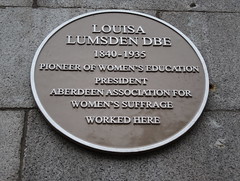