Aberdeen Grammar School, known to students as the Grammar, is a state secondary school in Aberdeen, Scotland. It is one of twelve secondary schools run by the Aberdeen City Council educational department. It is the oldest school in the city and one of the oldest grammar schools in the United Kingdom, with a history spanning more than 750 years. Founded around 1257, the year used in official school records, it began operating as a boys' school. On Skene Street, near the centre of the city, it was originally situated on Schoolhill, near the current site of Robert Gordon's College. It moved to its current site in 1863, and became co-educational in 1973. From 1970 to 1977, it was known as Rubislaw Academy, named after the nearby Rubislaw area of Aberdeen. In an annual survey run by the British broadsheet newspaper The Times, Aberdeen Grammar was rated the 12th best Scottish state secondary school in 2007, and second in Aberdeen behind Cults Academy. The most notable alumnus is Lord Byron, the Romantic poet and writer. A statue of him was erected in the front courtyard of the school. Other alumni include Scottish international footballer Russell Anderson, mathematician Hector Munro Macdonald, and Nobel Prize winner John James Rickard Macleod. 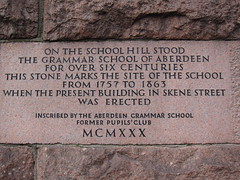 On the school hill stood the Grammar School of Aberdeen for over six centuries. This stone marks the site of the school from 1757 to 1863 when the present building in Skene Street was erected