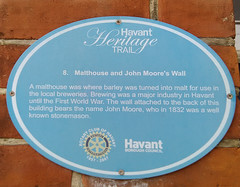 Malthouse and John Moore's Wall. A malthouse was where barley was turned into malt for use in the local breweries. Brewing was a major industry in Havant until the First World War. The wall attached to the back of this building bears the name John Moore, who in 1832 was a well known stonemason.

South Street, Havant, United Kingdom where they was (1832)