The Peaky Blinders were a street gang based in Birmingham, England, that operated from the end of the 19th century to the early 1900s. The group, which grew out of the harsh economic deprivations of working-class Britain, was composed largely of young men of lower to middle classes. They derived social power from robbery, violence, racketeering, illegal bookmaking, and the control of gambling. Members of this gang wore a signature outfit that included tailored jackets, lapel overcoats, button waistcoats, silk scarves, bell-bottom trousers, leather boots, and peaked flat caps. The Blinders' dominance came about from beating rivals, such as the "Sloggers", whom they fought for territory in Birmingham and its surrounding districts. They held control for nearly 20 years until 1910, when a larger gang, the Birmingham Boys led by Billy Kimber, overtook them. Though they had disappeared by the 1920s, the name of the "Peaky Blinders" became synonymous slang for any street gang in Birmingham. In 2013, the name was reused for a BBC television series entitled Peaky Blinders. The series, which stars Cillian Murphy, Paul Anderson, and Joe Cole, is a crime story about a fictional crime family operating in Birmingham just after World War I. 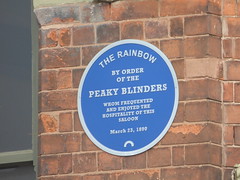 The Rainbow By order of the Peaky Blinders who frequented and enjoyed the hospitality of this saloon March 23, 1890