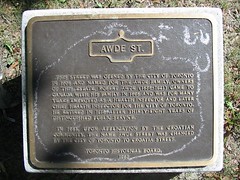 south-east corner of Croatia Street and Brock Avenue, Toronto, ON, Canada where they was