Thomas Robinson Ferens (4 May 1847 – 9 May 1930) was a British Liberal politician, a philanthropist, and an industrialist. He was the Member of Parliament for Kingston upon Hull East for 13 years, and served the city as a Justice of the Peace and as High Steward. He helped establish Reckitt and Sons, a manufacturer of household goods, as one of Kingston upon Hull's foremost businesses. His career with the company spanned 61 years—from his initial employment as a confidential and shorthand clerk until his death, as chairman, in 1930. In the House of Commons, Ferens spoke to further the cause of Women's Rights. He supported women's suffrage at home, and repeatedly drew attention to the trafficking of women and girls in the colonies. But never a great orator, and by nature a retiring man, much of his work at Westminster was completed in the committee rooms, away from the limelight. He did not seek re-election after being unseated in an acrimonious campaign in 1918. A devout Wesleyan Methodist, Ferens made numerous charitable donations throughout his life. His gifts to Hull include the Ferens Art Gallery and a donation of £250,000 for the establishment of University College (now the University of Hull). He is memorialized in the university's motto: Lampada Ferens. In other parts of the country he made substantial donations to schools, hospitals and charitable organisations. 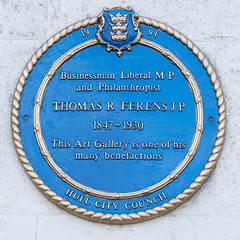