Philosophical Hall is a historic building in Philadelphia. Located near Independence Hall, the building has, for over 200 years, been the headquarters of the American Philosophical Society. 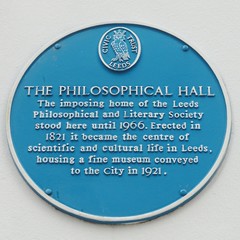 The Philosophical Hall. The imposing home of the Leeds Philosophical and Literary Society stood here until 1966. Erected in 1821 it became the centre of scientific and cultural life in Leeds, housing a fine museum conveyed to the City in 1921.