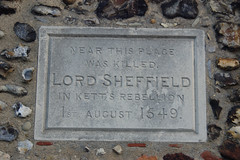 Bishopgate, Norwich, United Kingdom where they was killed near

215-217 Bow Road In the house that formerly stood on this site lived Edmond Lord Sheffield 1564–1646 who as captain of the Queen's ship "The White Bear" fought against the Armada of Spain in 1588.