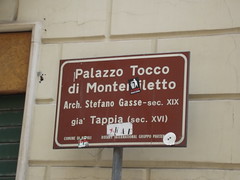 Via Toledo, 148, Napoli, Italy where it sited

St. Peter Lutheran Church. The history of Lutheran ministry in the Hallettsville area can be traced to 1868, when the Rev. Christian Geiger began missionary work among the area's German immigrants. Meeting first in the nearby Pagel settlement, a congregation was formally organized on December 21, 1889, in the home of Franz Groeber. Named St. Peter Lutheran Church, the congregation began with eight founding families and met in facilities provided by Hallettsville's Episcopal Congregation. Worship services, conducted in German and English, were held once a month. By September 1891 land was purchased for a church building, and the cornerstone was laid on December 9. The building's framework was destroyed in a storm that month, but it was rebuilt and formally dedicated on June 19, 1892. As the congregation continued to grow, the Rev. Frederick Wolfsdorff became the second pastor in 1901. Along with Anna Thekla Baessler, he organized the church's first Sunday School in 1902. Additional buildings were added to the church grounds over the years, and a new sanctuary was built in 1942. Celebrating over one hundred years in Hallettsville, St. Peter Lutheran Church continues to serve its community. #5075