The Thames Tunnel is an underwater tunnel, built beneath the River Thames in London, connecting Rotherhithe and Wapping. It measures 35 feet (11 m) wide by 20 feet (6 m) high and is 1,300 feet (396 m) long, running at a depth of 75 feet (23 m) below the river surface measured at high tide. It was the first tunnel known to have been constructed successfully underneath a navigable river,and was built between 1825 and 1843 using Marc Isambard Brunel's and Thomas Cochrane's newly invented tunnelling shield technology, by Brunel and his son Isambard Kingdom Brunel. The tunnel was originally designed for, but never used by, horse-drawn carriages. It now forms part of the London Overground railway network under ownership of Transport for London. 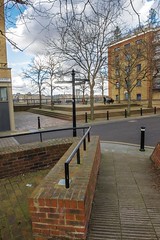 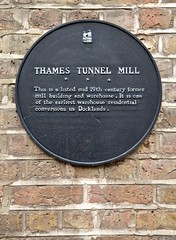 Near this spot in 1828 Isambard Kingdom Brunel was pulled half-drowned from the flooded shaft. The Thames Tunnel was abandoned for seven years and Marc Brunel sent his son to Clifton to convalesce...

Thames Tunnel Mill - This is the a listed mid 19th century former mill building and warehouse. It is one of the earliest warehouse residential conversions in Docklands.