Jessie Stephen, MBE (19 April 1893 – 12 June 1979) was a twentieth-century British suffragette, labour activist and local councillor. She grew up in Scotland and won a scholarship to train as a teacher. Family finances dictated otherwise, leading to her becoming a domestic worker at the age of 15. She became involved in national labour issues as a teenager, via organisations such as the Independent Labour Party and the Women's Social and Political Union. After moving to Lancashire and London she visited the United States and Canada, where she held meetings with the public including migrant English domestic workers. Stephen later become more involved in formal political parties, being elected as a local councillor and standing as a candidate in general elections. After moving to Bristol she became the first woman president of Bristol Trades Council. She was appointed MBE in 1977 and her life is commemorated by a blue plaque in Bristol. 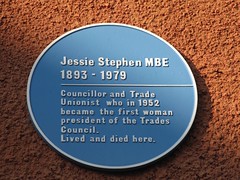 Jessie Stephen 1893-1979 Trade unionist and councillor who in 1952 became the first woman president of the trades council. Lived and died here.