English translation: Moule on 15-12-73 by honor.dr.a.buttigieg deputy prime minister in remembrance of the 25-anniversary of the universal declaration of human rights [AWS Translate]

HACKERMAN WAY Mr. Willard Hackerman '38 was a generous donor, steadfast leader, and dedicated alumnus of Johns Hopkins. Throughout years of visionary partnership, Mr. Hackerman, his family, and The Whiting-Turner Contracting Company have impacted countless areas of the Johns Hopkins University and its mission. With great gratitude and affection, Hackerman Way is dedicated in his honor. APRIL 2017

Joseph E. Seagram & the Seagram Distillery Joseph Emm seagram was bor in 1841. In fishers Mills near Galt. Ontario. Joseph and his brother Edward Frowde Seagram were orphaned early in their teenage years and spent the next Sis years at schor In vaI, Wnn is now known as Cambridge. After spending a yearstudying at a business college in Bullalo, New York, Joseoh 5. Seasram returned to Canad. and worked as a bookkceper ale mander de ms In and Strattord. In 1864 Seagram moved to Waterloo to work for the Fespeler Randall and Roos Mill and Distillery (once called Granite Mills). This mill, like many other mills, distilled surplus grain into whiskv. In 1869. Seagram marned HespelerS niece. Stephanie Urbs. Over the next few vears Seagram bought into the Hespeler Randall and Roos Companv, and eventually Dougnt out the other partners JOSEPH E SEACRAM & sANe LIMITED InssI. the Union foundry was sold to Jesse Morningstar and in that same year, he added a third building along the boundan of Foundry Street, which was renamed kuchid Avenue in 1925 The toundr , sold again in 1880 to Absalont Merner, who was the son of the New Hamburg Foundry owner. Samuel Merner. It changed names yet again and was known as A. Mererand Company. with a branch in bimira WATERLOO, oN FIGURE 1: The Seagram Distiller: c. 1901. Photograph from the collection of the University of Waterloo Library. In 1883, he changed the name of the company to The Joseph E. Seagram Flour Mill and Distillery: Taking a cue from Scotland and Ireland, Seagram introduced blended whisky to the Canadian market. Before long, the distillery was exporting to the United States and Europe. The company was incorporated in 1911 and the name changed to Joseph E. Seagram and Sons, Limited. In 1928, Seagram sold the plant to the Distiller's Corporation of Montreal, which was headed by the Bronfman family. In 1991, the plant in Waterloo was closed. Seagram is most famous for the distillery he created, but he was also quite a horseman, politician and philanthropist. When Joseph E. Seagram was nineteen, he purchased a half share in a racehorse in Galt. This was the beginning of a racing dynasty. The success of the distillery allowed Seagram Stables to grow. Story Wall Joseph E. Seagram & the Seagram Distillery Scagram is credited with bringing choice bloodlines from Endland and the United States, and with his lavish spending came huge success. Seagram horses won the Oueen's Plate ten times. as well as five King's Plates before Seagrams death in 1919. Seagram's stables were important for their contribution to lhe bloodstock of Canadian horses in general. Although Joseph E. Seagram passed away in 1919, his influence in the Waterloo communitv can sull be seen. The Seasran racing colours of black and gold became the colour • or Doin the City of Waterloo and the Universitv of Waterloo. Seagram also found his way into polities and served the Waterlos area in different roles. At one point in his Dollual career. Seagram campaigned against William Lyon Mackenzie King. As a philan- thropist, Seagram supported the Berlin and Waterloo Hospital. In 1893, he donated a large parcel of land to the Hospital Trust, provided that the hospital never refuse Buehler Foundry Abraham Buehler was one of the carly blacksmiths in Waterloo. In 1850, Buchler purchased a large lor on Ero Street West and constructed a large two-story yellow brick building Betore it was finished. more money was needed to invest the building and a man by the name of Booth Decame a partner with Buchler. The business that grew in the buildine was called the Buchler and Booth Foundry, dumssionto anyone nased on his or her "Nationality, Race, Colour. Religious Beliefor want of Religious Belief. Seagram was also founding member of the Waterloo Branch of the Canadian Association for the Prevention of Tuberculosis and sponsored the local music festivals. known as saengertests, In the area. Saengerfests were celebrations of the music and culture of the areas German haans Five ears later it became apparent that more room was needed to expand production, and in 1855 a one-story yellow brick building was constructed to the rear of the lot. By 1864 another partner had joined the group and the business was renamed the union Foundry. The Union Foundry was important in Waterloo because manufactured the threshers FIGURE 2: Portrait of Joseph E. Seagram (1841-1919). separators, ploughs and other Photo c. 1880. From the collection of agricultural implements used in early the University of Waterloo Library. farming practices. WATERLOO Manulife Financial Waterloo FIGURE 3: Buehler Foundry, c. 1880. From the collection of the Waterloo Public Library. In 1888, the • two branches of A. Merner and Companv were amalgamated with the Bricker Foundry (located on King Street South and were incorporated as the Waterloo Manufactunne Company. The business kept expanding quickly and by 1890 the Waterloo Manutacturing Company had built larger quarters and had transferred its operations to King Street South. The Seagram distillery purchased the buildings in 1901. They were used for a variety of purposes including barrel storage. The two original buikdings that Buchler built stand today and are located to the south, just beyond the railway tracks (See figure 3.) Images selected by LA.CA.C. History Walk Committee. Hentage infonation provided by L. A.C.A.C. members. Special thanks goes to Ellis Little and Marcia Shortreed. Writing and revisions by City of Waterloo Parks Department staf Lavout and design by Kathanne Wills. City of Waterloo. The History Walk is made possible by the generosity of Manulife Financial For more information. visit your local library.

English translation: So that the people know where they have been living here since August 9th MDCCCLXXX Aurelio Saffi of democracy full champion The veterans of the homeland battles headquarters of Pisa placed this memory on November 16th MDCCCXC [AWS Translate] 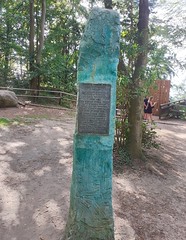 English translation: Next to the stone stands with the inscription: XXI German Downhill foresters sacrifices Pomeranian Society Forest 1892 this stone drowned before years in the sea. then managed to extract it. Polish foresters set it up here in the year 1992. simultaneously was solemnly unveiled commemorative stone with xcii-go reunion Polish foresters for emphasis long-term cooperation between Polish and German forester [AWS Translate]