Phoenix Yard This development, completed in 2006, stands partly on the site of and perpetuates the name of the 19th century Phoenix Yard, a range of seven tenements which were occupied up to the Second World War and demolished shortly thereafter. Several of the traditional Norwich industries are reflected in the occupations of their tenants. This is an ancient part of the city, lying near the mediaeval city wall and the church of St Paul, ruined during the Second World War and pulled down c.1950. Archaeological finds on this site included coins and tokens of English and German origin dating from 1302 to 1612 and an American silver dime of 1887. The most significant find was of a rare nummular brooch replicating a Roman coin of Constantius II and dating from the 8th or 9th century. The 1881 census records the population of the original Phoenix Yard as 39 occupants, the householders being: - Frederik Self whipthong maker Robert Wilfred hawker Samuel Warminger boot & shoe manufacturer James Winter silkweaver John Spalding cabinet maker Benjamin Parsons brick labourer William King carpenter 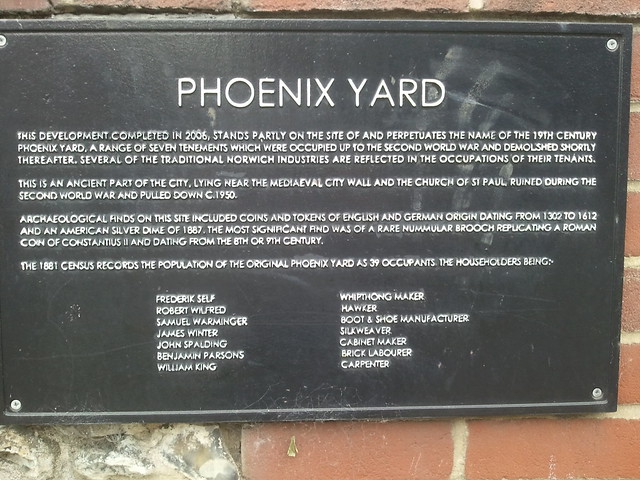