City of Pilot Point. Attracted by fertile land and abundant water and game, pioneers began to settle at this site near the edge of the Cross Timbers region in the late 1840s. The village, first known as Pilot's Point, was named for a high point of timber that served travelers as a landmark. Near an early immigrant trail, Pilot Point was also a stop on the Butterfield State Route. A townsite was platted in 1854 on land originally granted to Charles Smith. Dr. R. W. Edleman (1825-1904) of Missouri came here to launch a medical practice and open a drugstore. James D. Walcott ran the earliest general store and became the first postmaster in 1855. Alphius Knight, a settler from New York, built and conducted the first school in the town. Established by three local residents in 1872, Pilot Point Seminary was later renamed Franklin College and operated here for almost 30 years. In 1878 the town's first newspaper was published and in 1884 a bank opened. A marketing center for farmers and stock raisers, Pilot Point had a grist mill and a cotton gin. The arrival of two railroads, the Texas and Pacific and the Missouri, Kansas and Texas, boosted the local economy in the 1880s. Agriculture and light industry form the base of the town's economy in the 1970s. (1978) Incise on back: Marker sponsored by Chamber of Commerce Researched by: Mavis Burton, Norma Cole, Clifton Irick, Judy Lewellen, Estelle Whitley #890 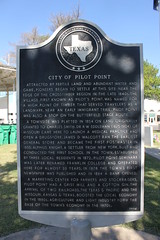