Cochran, Blair and Potts Department Store. Henry Mansfield Cook opened his first store in Centerville, Texas, in 1869, and in 1874 established the firm of H.M. Cook & Company with his son-in-law, Thomas W. Cochran. The firm moved to Buffalo, Texas, in 1876. Their mercantile business stocked dry goods, hardware, drugs, coffins, and included a lumberyard. The firm relocated to Belton in 1883 and opened a store at this site in 1884. Cook's son, Thomas A., joined the firm in 1896 and the business became known as Cook, Cochran, & Company. In 1904, three years after the death of H.M. Cook, Cochran's son, Harry T., and his son-in-law, Jesse S. Blair, purchased Thomas Cook's interest in the firm and the business became known as T.W. Cochran and Company. T.W. Cochran died in 1910 and his son-in-law, Arthur H. Potts, became a partner in the company. In 1917 the firm became known as Cochran, Blair, & Potts. Though the firm's inventory was destroyed by fire in 1928 the business reopened in 1929 under the management of J.S. Blair, H.T. Cochran, A.H. Potts, H.E. Blair, and Roy Campbell Potts. The corporation was dissolved in 1938 and the business became a partnership owned by members of the Cochran, Blair, and Potts families. The firm, which became solely owned by descendants of Roy Campbell Potts in 1970, was incorporated in 1977. Sesquicentennial of Texas Statehood 1845-1995 #928 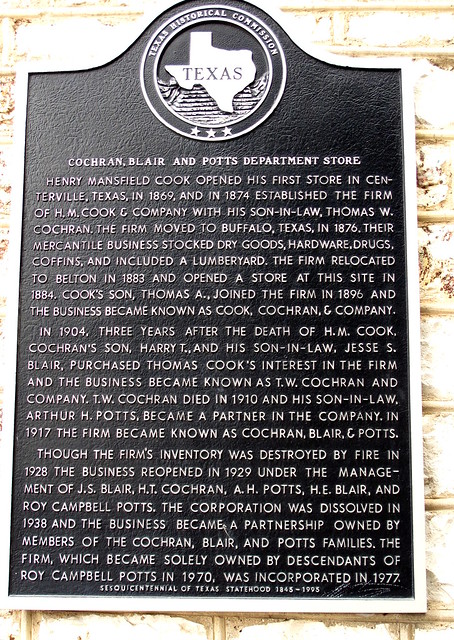