Tehuacana. Located at one of highest points (altitude 661 ft.) between Dallas and Houston. First noted in history by Philip Nolan's trading expedition, 1797. Home in early days of Tehuacana Indians, a Wichita tribe, who engaged in farming and peaceful pursuits until they were destroyed in early 1830s by Cherokees. Town is on Mexican land grant obtained 1835 by John Boyd, member First Congress Republic of Texas. In 1847 Boyd became first postmaster, and in 1849 nominated Tehuacana for capital of State of Texas. However, Austin won in election held in 1850. Tehuacana Academy, a Presbyterian school locally organized and supported, operated ten years. It was organized and supported, operated ten years. It was closed during Civil War, but furnished incentive (with help of Boyd) for founding in 1869 of Trinity University. Boyd's gift of 1,520 acres of land for college use includes present campus, where Trinity (now in San Antonio) operated until 1902. School plant was deeded to Methodist Protestant Church, which relocated here Westminster College, one of first junior colleges (1916) in Texas. The Congregational Methodist Church bought the property in 1953 and now operates Westminster College and Bible Institute on the historic campus. #5216 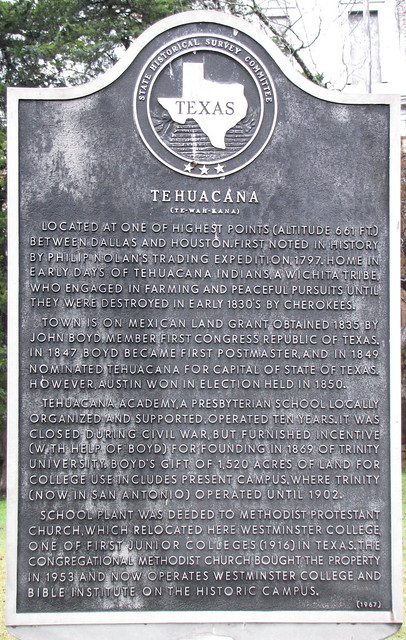