The Charles Goodnight Memorial Trail. The highway from this museum to the Palo Duro State Park (12 miles east) approximates course used by Charles Goodnight, outstanding Texas cowman and trail blazer, when he trailed 1600 cattle from Colorado to found first ranch on the staked plains of Texas in 1876. He entered precipitous Palo Duro Canyon by way of old Comanche Indian trail; drove thousands of buffalo from what is now park area; established his home ranch a few miles farther down canyon. Goodnight was born in Illinois, March 5, 1836. At age of 9 he rode bareback to Texas behind covered wagon driven by his parents; he hunted with Caddo Indians beyond the frontier at 14; guided Texas Rangers fighting Comanche and Kiowas at 25; blazed cattle trails about 2,000 miles long with Oliver Loving at 30. In partnership with John G. Adair, he expanded his original Palo Duro ranch into the giant JA and other holdings of more than a million acres and 100,000 cattle. He preserved the buffalo, founded a college, encouraged the settlement of the plains and led in a long fight for law and order. This foremost plainsman died March 12, 1929; and is buried at Goodnight, Texas. (1968) #5302 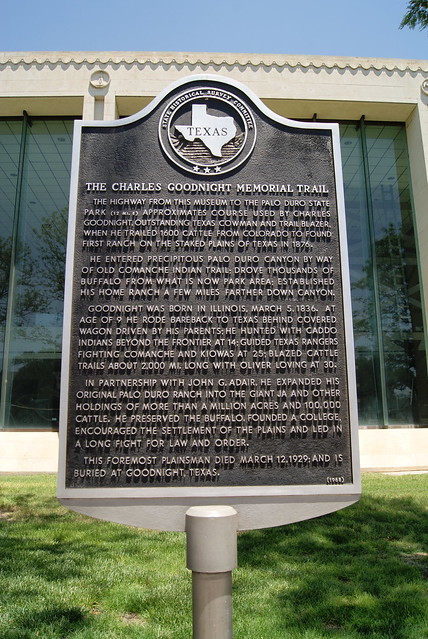