C. S. A. Texas Muster. Held on this spot April 4, 1964, to honor Texans who made up the greater part of forces fighting in the Civil War Red River Campaign of 1864-1865, that prevented a Federal invasion of Texas. Descendants answering to roll call for soldiers of 100 years ago included 37 sons and daughters of those fighters. Grandchildren, great-grandchildren and other kinsmen represented such leaders as the Trans-Mississippi commander, Gen. E. Kirby Smith, and Gens. A. P. Bagby, John R. Baylor, August Buchel, X. B. deBray, Tom Green, Walter P. Lane, Henry E. McCulloch, Jas. Major, Horace Randal, Wm. R. Scurry, Wm. Steele, John G. Walker, and Thos. Waul; and Cols. Henry Gray, Philip N. Luckett and P. C. Wood. Friends and descendants of the Val Verde Battery restored one century-old gun and brought it from Freestone County to ride in the 8-mile-long parade that moved 36 miles northeastward from here to the Mansfield Battleground. There the cannon shook the earth as it did April 8, 1864, and the assemblage unveiled the first out-of-state marker of the Texas Civil War Centennial, commemorating the Battle of Mansfield. #7699 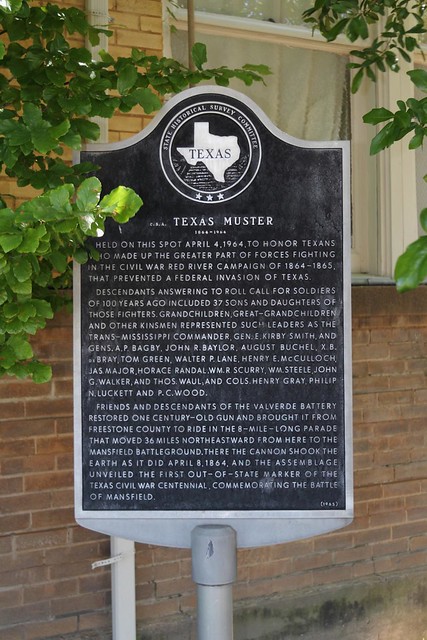