Marshall, C.S.A.. As a center of activity for the Confederacy west of the Mississippi, this East Texas town played a major role in the Civil War. Headquarters of the Trans-Mississippi Department Medical Bureau and Postal Service were here plus two military hospitals and a commissary bureau. An ordnance bureau, depot, arsenal, and laboratory produced and distributed powder, pistols, saddles, harness and clothing. Following the occupation of Missouri by Union forces, the governor and other officials of that state made this the wartime Confederate capitol of Missouri from November, 1863 to June, 1865. Three wartime conferences of governors and Confederate military officials of Texas, Arkansas, Louisiana and Missouri met here. One in 1862, resulted in the establishment of a separate department for these states. In 1863 military and civil authority was consolidated under Gen. E. Kirby Smith, commander of the department. On May 15, 1865, one month after Appomattox, discussion of continued resistance or surrender resulted in a stalemate. Prominent Confederates from Marshall were Edward Clark and Pendleton Murrah, wartime governors of Texas; Louis T. Wigfall, a "state's rights" leader in the U. S. Senate prior to secession and member of Confederate Senate; Dr. James Harper Starr, Trans-Mississippi postal agent; and Brigadier-Generals Matthew D. Ector, Elkanah Greer, Walter P. Lane and Horace Randal. This was the home of Lucy Holcomb Pickens, "Sweetheart of the Confederacy," the only woman whose portrait graced Confederate currency. Rather than surrender at War's end, a number of high-ranking Confederate military and civil officials began an exodus from Marshall to Mexico. A Memorial To Texans Who Served The Confederacy #10191 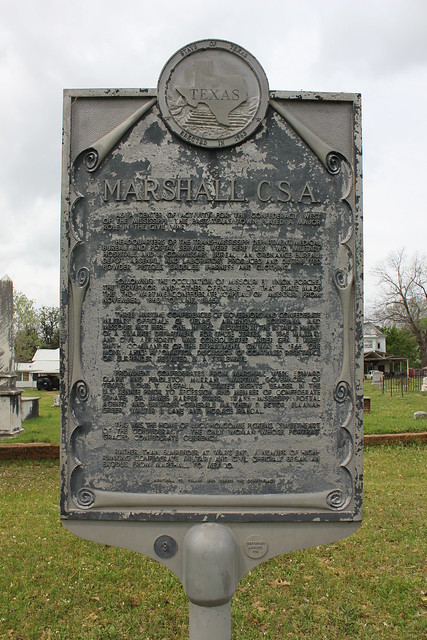