Trenton. The earliest Anglo settlers in this area, drawn to the fertile farmlands, probably came to the locality known as Wildcat Thicket in the mid-1800s. By the 1870s a community had begun to form, and settler A. J. Russell reportedly named Trenton for a hospital in which he's been treated during the Civil War. The railroad arrived in Trenton in 1881, the same year a post office was established, and the town began to boom. By 1885 there were several thriving businesses in operation. Trenton was incorporated in 1890. Dr. W. C. Holmes, a former Trenton mayor and active citizen, began to publish the weekly "Trenton Tribune" in 1909. The town maintained its size during the 20th century, outlasting many of its neighbors. Trenton remains a bustling community. (1999) #11877 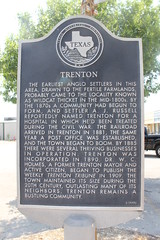