Angleton Independent School District. On September 5, 1892, two Angleton residents donated one of the original town blocks near this site to the city for school purposes. Citizens contributed two hundred dollars for a frame building to house the first classes for Angleton students and serve as a meeting house for lectures, programs and services. Enrollment increased quickly, and the community made additions to the structure as needed. In 1897 Angleton was incorporated as a school district. A new brick building erected that year was destroyed in the 1900 storm but was soon replaced. The people of Angleton took pride in their school system and its support. The city touted its academic program to attract new residents. Citizens continued to demonstrate their dedication to the district by voting to enlarge the district from 12 to 25 square miles and approving the construction of another, larger brick facility after the second brick building was destroyed in a 1909 storm. The new structure was called "Albert Sidney Johnston School" for one of the county's famous former citizens. The community continued to grow, and within a few years a new high school was erected. In 1931 the school district served eleven grades instead of ten, and in about 1940 the district extended its program to twelve grades. Separate schools for African American and Hispanic students were established until widespread integration was achieved in the 1960s. The town annexed more rural land, resulting in a still-higher enrollment and more crowding in the schools. The Angleton School District continued to grow, and by the end of the twentieth century encompassed 396 square miles. (2000) #11961 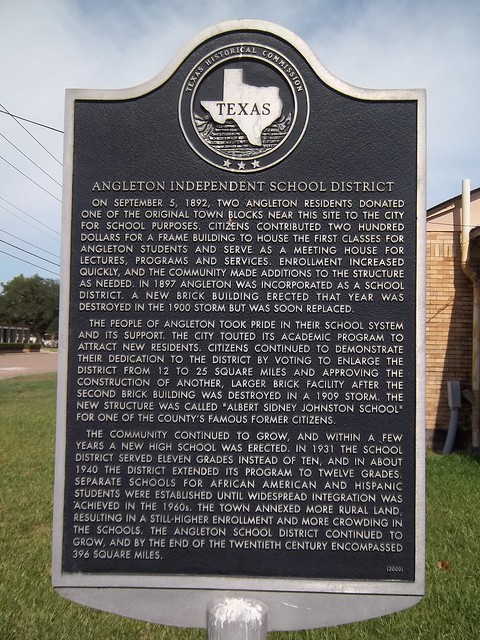