Pleasanton City Cemetery. Begun in 1865 as a family burial ground, the Pleasanton City Cemetery is a reflection of the history of the community from its earliest days. The first burial was that of three-year-old Gustave B. Doak, whose parents, Jonathan and Mary Elizabeth (Zumwalt) Doak, buried him on their property, which was then on the western outskirts of Pleasanton. Friends and relatives of the Doak family came to use the cemetery, which first appeared in county deed records when Jonathan Doak sold his property in 1884 to George Washington Marion Duck, reserving one acre for the cemetery. Additional donations of land over the years enlarged the acreage of the cemetery. Burials in the Pleasanton City Cemetery include a number of infants and children in the older section, reflecting the harshness of pioneer life in the community's early years. Also buried here are Dr. James H. Lyons (1805-1881), who served in the second Texas legislature, was a Mexican war veteran and twice mayor of San Antonio; Mexican War veteran captain Hartwell Coleman Fountain (1810-1886); Graves Peeler (1886-1977), who is credited with helping save the Longhorn cattle breed in the 1930s; and a number of local officials and community leaders. Known in the 19th century as the Doak Cemetery and as Sandhill Cemetery, the historic burial ground is maintained by the Pleasanton Cemetery Association. (2001) #12533 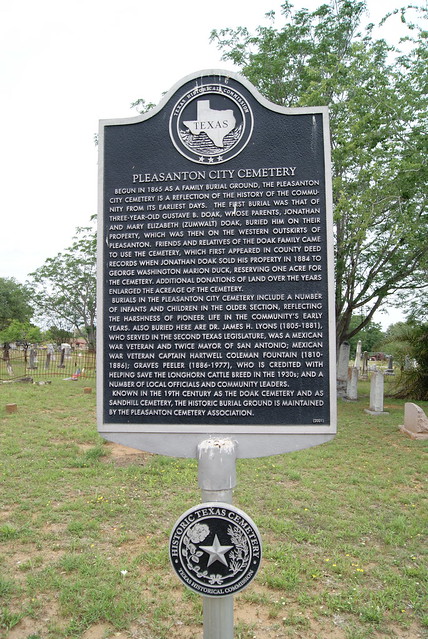